Staff member
#1
A man who identified himself as Moses Edwin, a prophet in one of the orthodox churches in Lagos was on Friday arrested by men of Rapid Response Squad of the Lagos State Police Command for stealing $500 belonging to a customer while trying to convert $5,000 into Naira.

Edwin, 50, a bureau de change operator and his gang member, Daniel Ebhohimen, were arrested beside Airport Hotel, Ikeja three days after stealing $500 from $5,000 bills presented to them by one Bayo Lookman for conversion into naira. 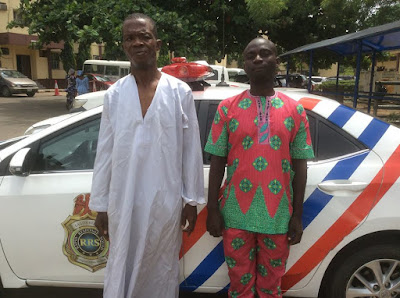 The two suspect had in exchanging $5,000 for Bayo Lookman, a member the National Youth Service Corp serving in Lagos, surreptitiously removed $500 from the notes presented to them for confirmation opposite Airport Hotel, Ikeja.

Edwin had promised an exchange rate of N387 to a dollar while negotiating with Bayo. He thereafter invited another member of his gang, Ebhohimen who together while confirming the dollars removed $500 before handing over $4500 back to unsuspecting Bayo in his car.

According to Bayo, “I was trying to help my mum change the $5,000. I got to Airport Hotel and I met these men. After negotiating back and forth, they offered me N387 to a dollar.

They took my details on the ground that the transaction was going to be online. Edwin requested that I surrender the $5,000 bills for them to confirm. Reluctantly, I gave them but I was monitoring them and I was counting along with them in my car”.

He went further, “they were mid-way into the counting when another member of the gang distracted me from the driver side of my car.

Thereafter, they handed back the money to me that it was complete. They told me to keep it in order for their colleagues not to see us and we headed to one of the banks in Opebi.

We entered the bank. All along they prevented me from counting the money. At the bank, they told me the rate they gave me was no longer possible and that they were backing out but I offered for a renegotiation.

I told them to excuse me and I went into the gent to confirm the money. I counted it and $500 was missing. Before I could come out they had ran away. The door attendants told me he saw them rushing out of the bank.

I went to where I met them but I couldn’t see them. It was the third day that I saw Edwin and I invited the police”.

Edwin in his statement to the police, acknowledged the crime. He stated he never followed the gang to bank, adding that he only ordered his other gang members to finish up the transaction. He added that he was given N10, 000 when they came back from the bank.

Edwin there after assured the police that his gang was ready for amicable settlement by paying back the missing $500.

The two suspects have been transferred to the State Criminal Investigation Department for further investigations.