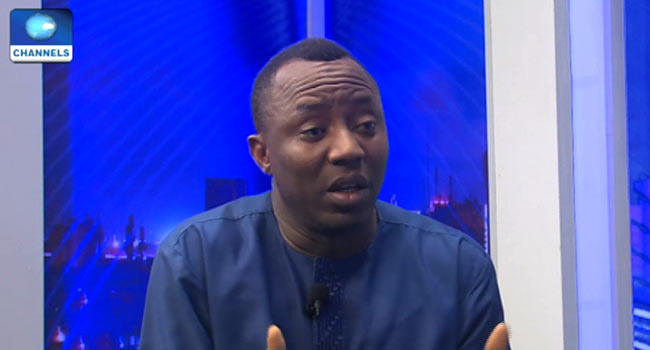 Omoyele Sowore speaks during an appearance on Channels Television’s Sunday Politics on December 2, 2018.

A Federal High Court in Abuja on Friday affirmed the suspension of the presidential candidate of the African Action Committee (AAC), Omoyele Sowore in the 2019 presidential election from the party.

The court ordered the deputy national chairman of the party, Mr Malcolm Fabiyi, to stop parading himself as such.

The court also restrained the Independent National Electoral Commission (INEC) from further recognising the suspended chairman, pending the determination of the motion on notice.

Delivering judgement on Friday, Justice Inyang Ekwo cited the failure of Sowore to personally depose to the counter-affidavit filed against the suit that was brought against him by the acting National Chairman of the party, Leonard Nzenwa means that the claim of the plaintiff remains uncontroverted.

Justice Ekwo in his judgement says by the provision of section 40 of the 1999 constitution of the Federal Republic of Nigeria, African action committee is a political party registered by INEC and as such the court cannot meddle into its affairs.

However, counsel to the first defendant, Barrister Inibehi Effiong disagrees with the judgement as the evidence of Sowore cannot be countenanced because he did not personally depose to the affidavit, as evidence was given to the court that he had left the country on May 12, whereas the suit was filed on May 14.
You must log in or register to reply here.
Share: Facebook Twitter Google+ Reddit Pinterest Tumblr WhatsApp Email Link