Nuclear Deal: US Is Playing With Fire – Iran 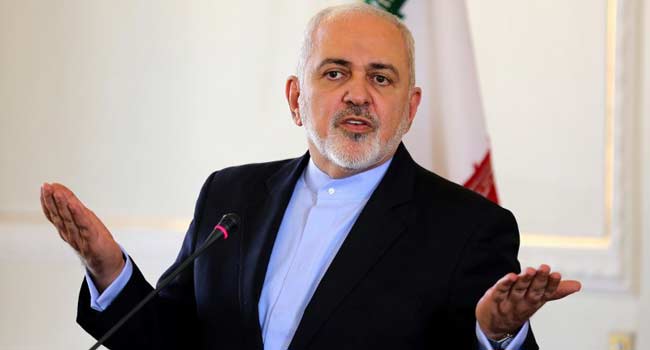 Iranian Foreign Minister Mohammad Javad Zarif warned Monday that the United States is “playing with fire,” echoing remarks by President Donald Trump as the two sides are locked in a standoff over Tehran’s nuclear program.

Tensions have since soared, with the US calling off airstrikes against Iran at the last minute after Tehran downed an American drone, and Washington blaming the Islamic republic for a series of attacks on tanker ships.

“I think the United States is playing with fire,” Zarif told NBC News.

Zarif’s comments came as the United States imposed unusually harsh restrictions on his movements during a visit to the United Nations.

Weeks after the United States threatened sanctions against Zarif, Secretary of State Mike Pompeo said that Washington issued him a visa but forbade him from moving beyond six blocks of Iran’s UN mission in Midtown Manhattan.

“US diplomats don’t roam around Tehran, so we don’t see any reason for Iranian diplomats to roam freely around New York City, either,” Pompeo told The Washington Post.


No US diplomats are based in Iran as the two countries broke off relations in the aftermath of the 1979 Islamic revolution that toppled the Western-backed shah.

“Foreign Minister Zarif, he uses the freedoms of the United States to come here and spread malign propaganda,” the top US diplomat said.

UN spokesman Farhan Haq told reporters that the UN Secretariat was in contact with the US and Iranian missions about Zarif’s travel restrictions and “has conveyed its concerns to the host country.”

The United States, as host of the United Nations, has an agreement to issue visas promptly to foreign diplomats on UN business and only rarely declines.

Zarif is scheduled to speak Wednesday at the UN Economic and Social Council, which is holding a high-level meeting on sustainable development.

Despite the restrictions, the decision to admit Zarif is the latest sign that Trump’s administration appears to be retreating from its vow to place sanctions on him as part of its “maximum pressure” campaign on Iran.

Treasury Secretary Steven Mnuchin said on June 24 that sanctions against Zarif would come later that week.

Critics questioned the legal rationale for targeting Zarif and noted that sanctions would all but end the possibility of dialogue — which Trump has said is his goal.

Zarif said in an interview with The New York Times he would not be affected by sanctions as he owns no assets outside of Iran.