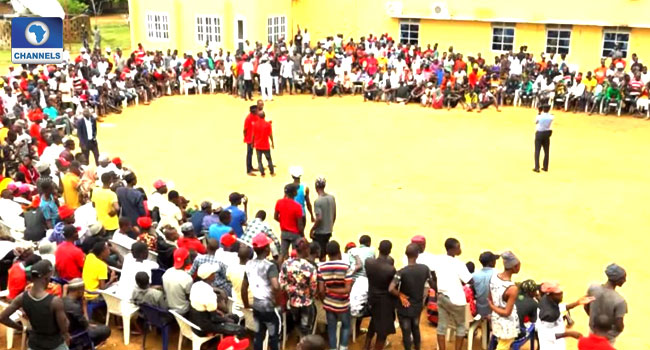 Over 500 suspected thugs popularly known as Sara-Suka have renounced all forms of criminality in Bauchi state.

The Police Commissioner in the state, Habu Sani, who received them at the Command headquarters, said that a large number of arms and ammunition and other dangerous weapons were recovered from them.

He explained that the Police adopted a carrot approach to woo members and mandated them to sign an undertaking to stop all forms of civil disturbances.

“We are here to formally receive over 500 repentant Sara Suka youths who met the conditions set by the command.

“The door is still open to those who are yet to repent, to see reasons why they should tow the same line as the command will not rest its oars to sustain the fight against crime and criminality in Bauchi state.”

Meanwhile, Governor Bala Mohammed who was represented by the Chief of Staff, Abubakar Kari, stated that the Government will integrate the youths into the society and engage them with their preferred skills for employment.

“We will collect the data from the police, we have our own data, but we will harmonise and differentiate what sector each of them is trying to move into; some are carpenters, welders, plumbers, and many other things.”
You must log in or register to reply here.
Share: Facebook Twitter Google+ Reddit Pinterest Tumblr WhatsApp Email Link