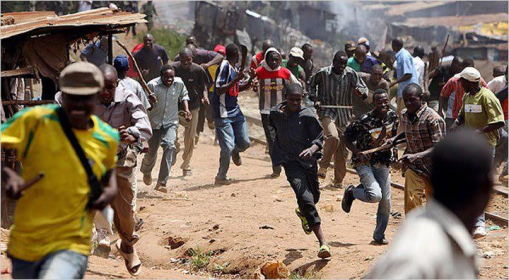 A retired police officer identified as ASP Usman Gambo Kobin, from Kobin, Numana Chiefdom in Sanga LGA of Kaduna state, wrote about how he lost his wife, mother, father, brother and in-laws in a recent attack in Southern Kaduna. He shared his story to facebook user, Olutoyosi Omotoso. Read below...
My name is ASP Usman Gambo Kobin, I am a retired police officer, I am from Kobin, Numana Chiefdom, Sanga LGA of Kaduna state.
We learnt that some people were killed in Nandu, and some in Kabamu all in Numana Chiefdom.
I then went to my old father around 7am and said, “baba, I don’t know what may happen to us today based on what we have been told but stay at home and don’t move around."

A Fulani man had actually hinted us of the impending attack but it was hard to ever imagine that our Fulani neighbours would come around to attack us.

Then around 1:30 pm, we suddenly heard gunshots. They had launched their attack. Without any weapon, and nowhere we could escape to, I told my wife to remain indoors and let us be killed with dignity in our home.
But, she was too scared and insisted she wanted to run out believing she may escape. She then ran out as shooting was still going on.

My 104-year-old dad whom I asked to stay indoors was outside and he was the first casualty of the attack as they shot him outside.
After some time the shooting came close to my house, behind my room and since they were in my backyard, that meant that the entire village had been surrounded.

You could hear the screaming and shrieking of women and children the invaders were just killing everyone.

It was horrible. They shot dead my wife as she ran out trying to escape. At the end of the shooting, nine of my relations were gunned down.
I lost my father, Madaki aged 104; my elder brother, Paul aged 70; my wife, Salamatu Gambu aged 56 years; two of my brothers’ wives, Hadiza Danjuma, 35 and Helen Fedelis, 40 and the young son of my elder brother.
Also killed were the wives of my elder brother’s two sons as well as elder brother’s grand daughter who was eight months pregnant.
Among those who carried out the killings were Fulani who were born and raised in our village. We know them and they know us also.

We have been living with them since their parents gave birth to them in Kobin. We know them. Their leader is one Yakubu Alhaji Haruna who is still in Sanga area and moving freely doing what he likes.
People who were killed in my village were 48. Yes, we buried 48 people in a mass grave in Kobin. They were killed by people we gave our land to settle and graze their cattle without a quarrel.
There was not even a disagreement or anything between us before the attack. That is the most annoying aspect of the killings. The mass grave is there, just beside my house.
And while killing our people, they were shouting, “Allahu Akbar! Allahu Akbar! Allahu Akbar!” (“God is great” in Arabic, popular with jihadists while on mission).
They were also saying “Ku Kashe Arna! Kashe Arna” (Kill the pagans! Kill the Pagans!) I was trapped in my home watching and listening. Those of us who survived are however suffering.
L