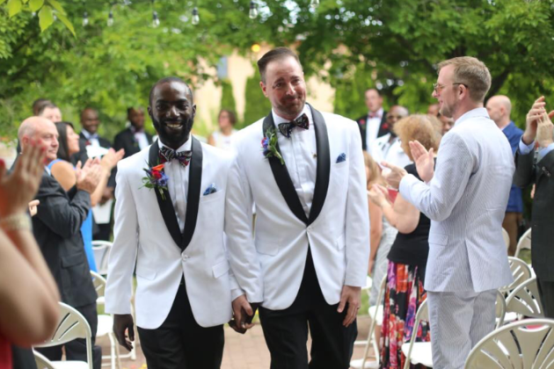 On August 1st, LIB reported (read here) and shared photos from the white wedding of a Nigerian Gay man David Ukre, from Warri, Delta state, who got married to his white partner Eric T. Shoen in New York, on Saturday July 30th. The post on LIB was to celebrate their love and freedom in the US. However, slight controversy arose when some trolls attacked the newly married couple on their social media accounts.

David's husband Eric has now opened up in an article for The Huffington Post, saying they didn't expect the news to leak and break the Nigerian Internet, as David's family members were unaware about his sexuality and wedding. Read his article below. 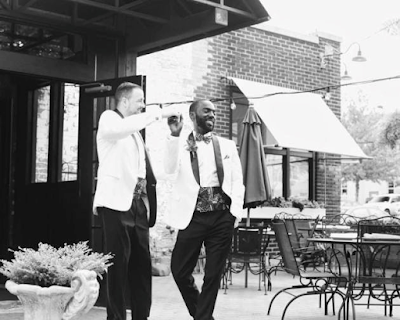 We tried very carefully to make sure this wouldnâ€™t happen. Guests were instructed not to take photos during the ceremony. We were very particular about who was invited. It was a sad added bonus that most of the guests from Nigeria cancelled just 24 hours before the ceremony.
On July 30, I married a Nigerian man. Although he is very special to me, he is not famous. He has never done anything to warrant so much media coverage. We had a small ceremony under the leaves of some great old trees on the lawn of an adorable little restaurant. My family and our closest friends joined us. Our vow exchange was only 30 minutes long.

What followed was a day of love, laughter, joy, eating, sore feet, kids running circles around the yard, and family and friends celebrating our day together. We posted only a few photos to our Facebook pages and asked guests to not post photos or mention our marriage.

That night, we went out dancing to a club with friends who stayed over. The next morning, we decided to take some friends with us on the first day of our honeymoon to see Niagara Falls. We were still enjoying every moment of calling each other husband, taking photos kissing in front of the falls, getting sprayed at the Cave of the Winds, and accepting well wishing texts from family and friends.
Monday morning, I woke up early to return the rental car that we had used for the weekend. When I returned, my husband was pacing and crying, distraught, pointing to his phone. Somehow, someone had either sold or given photos from our wedding and first dance to one of Nigeriaâ€™s notorious gossip bloggers, Linda Ikeji who chose to publish them on her blog. Whether to out David and make a mockery or to somehow use it as advocacy, no one knows. What we do know is that she had no permission from either of us to use our photos or story.

My husband calls me â€œthe fixerâ€￾ for a reason. I felt like I might be able to fix this before it got out of control. I called my sister who is an attorney for advice. Given that the information was posted on an international site, there was little we could do. My friends at Google and Blog-spot, and attorneys who are friends of mine gave me the same unfortunate news. Mind you, this is all happening at 6:30 a.m. on a Monday morning. Friends from all over the USA messaged me as soon as I posted on my Facebook for some assistance.

I did contact the blogger directly via email and asked that the photos of our wedding, of our trip with my family, photos of our groomsmen, and direct quotes from my Facebook page be removed. I quickly locked down the security on my Facebook which had been relatively open so that I could use it for advertising and sales. I never heard back from her.

At 7:00 a.m. I got a call from my twin brother, who is my best friend:
J: â€œEric, which blog are you talking about?â€￾
Me: â€œThere should only be oneâ€￾
J: â€œItâ€™s already on at least a dozen blogs.â€￾

I had to tell David at this point that there was little I could do. At the same time, his phone and my phone started to heat up with Facebook messages from strangers condemning us for being gay. His phone started to ring continuously from unknown Nigerian phone numbers.
I felt lost. I still get a terrible feeling in my stomach just a week and a half later. I hate being helpless. How could our tiny, personal wedding in Rochester mean so much to hateful people on the other side of the planet that they would find us on the internet so they could harass us?

I worked as fast as I could asking bloggers to remove our photos and mention of us, but only one complied. By the end of the day, more than 150 sites had blogged about us. They were not saying anything overtly mean for the most part. The comments, on the other hand, mostly mentioned the â€œend of times,â€￾ beheading us if we came to Nigeria, asking God to rain down evil upon us, suggesting that we get anal cancer and die, calling us devils, and threatening us in various other vulgar ways. Some people commented positively, but they were in the minority. 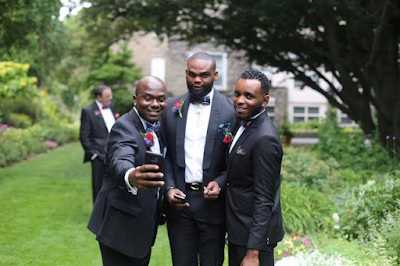 Davidâ€™s groomsmen were also accused of being gay. One of them felt compelled to come out via social media after the pressure.
Davidâ€™s family was harassed by neighbors and local hooligans. He hadnâ€™t told his family we were getting married. They were not even aware he was gay. Davidâ€™s sister called to make sure we knew that she knew and she supported us. She relayed that his mom was not admitting anything and continued to defend David to anyone who bothered her. His other siblings also messaged us to say that they were being harassed via telephone, in person, and social media.

You might ask yourself why I would share this story.
You see, I fell in love with an amazing Nigerian man. I knew it was illegal for him to be gay in his country. I knew it was illegal for his family to know he was gay and not report him. I never thought that my tiny little wedding in Rochester, New York to this man would go any further than between our close friends who were invited and maybe some of their friends.

David was afraid to come out of the closet to his family for so many reasons, some of which I recognize in my own coming out story. Telling my parents was very frightening, painful and tough, but they support me now. I grew up here, where letting someone know you are gay was tough, not illegal. Some of Davidâ€™s reasoning can only be understood by someone who grew up in Nigeria or a similar country where it is illegal to be gay. Why would this be such big news in Nigeria? I believe it is because the press still wants to vilify gay men and women. They want to show that the USA is a place that corrupts the morals of children and is a den of sin an iniquity. The current political election probably isnâ€™t helping change that impression much. The mere thought of two men getting married is enough to incite vitriol from all corners of Nigeria, and other parts of the world still today.

We queer folk still have a lot of fighting to do. We may have thankfully won marriage equality here on American soil, but until it is legally safe for our gay, queer, trans, and gender non-conforming brothers, sisters, and family to live their lives as they wish to be in all corners of the world, the fight must go on.